I released the persistent browser based game Perenthia last week into a public BETA. Got some great folks on there testing stuff out, finding bugs and overall just providing great feedback. It's funny how much can get past your unit testing when you are the one who wrote the code.

Anyway, got a game refresh and loads of bug fixes coming either tonight or tomorrow and then hopefully I can move on to getting quests ready to go.

I have started the database upload for Perenthia and will move the files shortly thereafter. Once everything is tested up on the server to ensure it is working properly I will open up the game.

The persistent browser based game Perenthia will open for a public Beta tomorrow evening. Some of the quests have yet to be completed but they are higher level quests so I still have time to map them all out.

Banks and Households are not complete and although you may see references to them they do not function as of yet. Banks will allow you to borrow money and store items and gold and Households are player run groups that will feature private messaging, group events and quests and could possibly include Household vs Household competitions.

Not sure what time of day I will open up Perenthia on Friday the 14th. Probably sometime in the morning, depends on how my last testing goes. I am finishing up testing out the quests and auto generated dungeons. If everything goes well, which it never does, the game will be live Friday morning. If I run into snags could be later in the day or worse case Saturday.

For those who don't know, Perenthia is a persistent browser based game set in a fantasy world and will feature Character Profiles, Live Chat, Quests, Forums, Households and hopefully Player vs Player combat.

Character Profiles will allow you to upload an avatar image, provide a description about your Character and even maintain a journal where other players can leave you comments and you can catalog your adventures.

Live Chat is built into the interface and will allow you to chat with other players in the game.

Quests are an important part of the game and the main storyline drives several key quests that will send you all across the landscape.

Forums allow you to interact with other players, helping each other on quests, reporting bugs, etc.

Households have yet to be completed but will be player run and allow the head of household to assign special titles to levels and create a unique experience for members.

Silverlight goodness is coming to the D.C. area in the form of a Silverlight Dev Camp. Keep checking Frank's Blog for more details.

Here is a screenshot of the PBBG mapping tool I wrote for creating the Perenthia world. The screenshot is the City of Angarath, a starting point in the game. The mapper is a  Windows application written in C# 2.0. 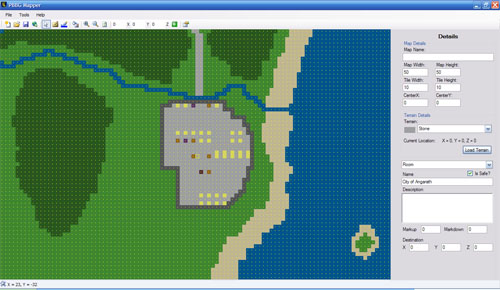 Here is a screenshot of the AJAX interface for my PBBG Perenthia, which is scheduled for a beta release this Friday September 14th. This will be the main game screen where all actions related to game play will take place. 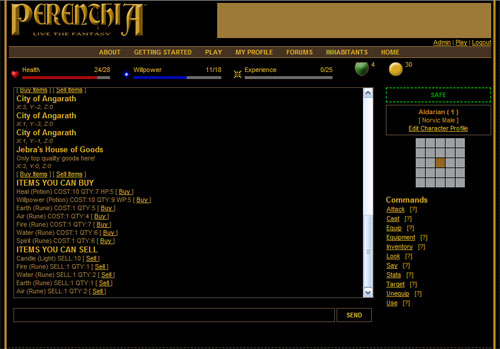 Making good progress toward the Beta release of my PBBG Perenthia on September 14th. Not sure what time of day I will open the site up, probably in the morning some time on the 14th. Anyway, the AJAX game interface is working great after I scaled it down a little. I am still working on a more advanced interface in Silverlight 1.1, might be a little while before that is finished though, I want to get the game up and running first.

Alright, it is looking like the first initial release of Perenthia will be September 14th 2007. The initial release will feature an AJAX based user interface, kind of looks like a MUD client, with a new Silverlight interface to follow in the coming months, once Silverlight 1.1 goes into Beta with a Go Live license.

Players will be able to create Characters with a special profile page where they can describe their Characters and even upload an avatar image. A friends list on the Character Profile page will allow players to link to their friends and simple Character blog will allow the player to keep visitors up-to-date on their progress. Some other features of Perenthia will include player run Households, where players can make up advancement ranks, various length quests for all levels of play that will focus and determine the main story line, a different kind of magic system consisting of runes of power that you can combine to create spell effects and of course adventuring into wilderness to defeat scary monsters.

For those unaware, Perenthia is a persistent browser based game (PBBG) set in a fantasy medieval world.