Thought I would post a screenshot of the game so far. I still have a lot to do but it is coming along pretty well I think. I am hoping to get a playable prototype in the next few days, just depends on how development goes. 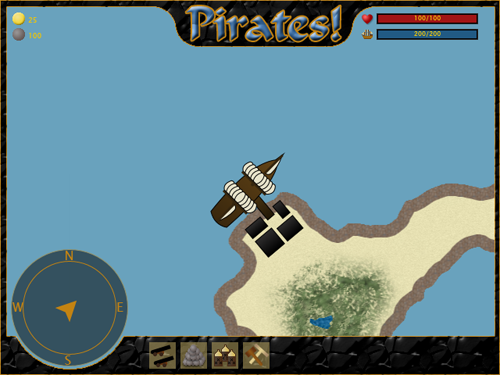 I have recently been working on a Pirate Game in Silverlight 1.1 Alpha and decided to use the Farseer Physics Engine to handle collisions, etc. I used Andy Beaulieu's Getting Started with Farseer Physics and Silverlight to create my SpriteBase class. I originally used the Silverlight Games 101 tutorials to get started and got turned on to Farseer from that site.

Since this is a Pirate game you will be sailing around in a ship encountering other ships and various islands. One of the big challenges I ran into right from the start was getting the Vertices setup for collision with an island. I am unable to visualize more than a view Vertex points at a time so I was having trouble getting the island border setup correctly. For those unaware, Farseer provides a Body class which just represents a body in space. You can assign the Body a Geometry object that actually defines its physical structure within your world. The GeomFactory class provides methods for creating circle, rectangle and polygon geometries.Since I have a island I was in need of a ploygon geometry which is created using a collection of Vector2 instances within a Vertices instance.

When creating the Vector2 instances to add to the Vertices collection you have to specify the X and Y values in relation to the center of the geometry. In other words, if I have a geometry that will be 64 X 64 and want to set a Vertex at the top, left of the square the Vector2 instance would be new Vector2(-32, -32). For an island that is 512 X 512 that is a lot of going back and forth with the calculator.

Anyway, not matter what I did I still couldn't get the vertices correct. I eventually created a helper method in a Utils class that will accept the Vertices collection, a width and height and create a Path instance that I can add to my Canvas in order to see the Vertices. This greatly helped me to understand where I was placing my points. Here is the CreatePathFromVertices method I created:

To use it all I do is call it after creating my Vertices collection and add the returned Path to my UserControl Canvas:

This was working better but I wanted to be able to create the Vertices collection a little faster. I had originally created my island image in Photoshop and so I opened up the PSD and added a new transparent layer called Vertices. In the Vertices layer I proceeded to draw points around the island using a 1px Pencil of Magenta color. After I created a point based structure around the image I saved just the Vertices layer as a PNG. I then wrote a C# WinForms application to load up the PNG and parse it pixel by pixel, creating a Vertex for each of the Magenta points located within the image. The WinForms application then writes out the Vertices code required by the Farseer engine based on these Vertex instances. 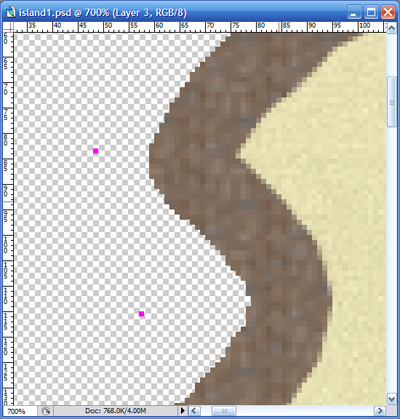 Doing this gave me the Vertices I needed but not in the order I needed. The CreatePloygonGeom method requires the vertices to be in a clockwise or counter clockwise order. Parsing each pixel of an image only gives you the pixels in order from each x to y or y to x. I ended having to add the Image x and y location of each pixel as a comment to the end of the Vertices.Add line of code being generated by my WinForms application. From there I was able to use Photoshop to re-order the Vertices so that they rendered correctly.

Using my CreatePathFromVertices method I was able to see the outline of the shape I created as the collision geometry for my island. One this I did notice was that I needed the very first line of the Vertices code to be repeated at the very end in order to join the geometry shape.

Here is a screenshot of the game with the Path around the island displayed. Granted the path is not perfect but sufficient for the game I think. I can always alter it but the more Vertices you add the longer it takes to load. 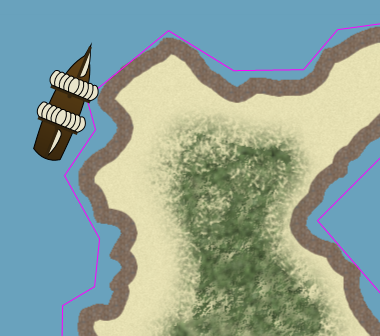 Here is the full code from the Constructor of my island class:

The code in the "Vertices" region was generated by the C# WinForms application and I re-ordered manually. I will release the source to the Pirate game once it is complete, if you want the prototype code just contact me. I will probably post the prototype online once I get the Ship AI and cannons working so at least there would be more to do that just sail around the island. :)

Here is the code for the C# WinForms app that will read the image pixel data and create the Vertices code segment: SilverlightImageToVertices.zip

I've decided to take a little break from working on Perenthia and focus some time on building some smaller, shorter life span games. I have two reasons for doing this; the first being that by building some smaller games I can get the games completed faster which is very encouraging and allows me to have new projects to work on. Perenthia is very time consuming because I keep making it complex, I feel it needs this complexity though to be a fun and engaging game. The second reason is that I want to get my feet wet in Silverlight and building some smaller games would give me just that. I will continue working on Perenthia but want to get a few more of my ideas built and playable before finishing it out.

That being said the first Silverlight game I will be creating will be a Pirate game where you sail around, avoiding the navy, attacking ships and finding buried treasure. Doing something like this will enable me to get core mechanics worked out in Silverlight along with animation, collision detection, etc.

As it stands right now I have the basic player movement and ship movement down. The graphics are pretty bad as it was just something for prototyping. The game will be a top down view and hopefully provide some fun gameplay in short intervals. I want to be able to persist the player information so you can pick back up where you left off and ultimately complete the game.

The goal of the game will be to attain the buried fortune of a long dead pirate named Rough Hand James. He created a map to his treasure and scattered the pieces all across the globe. It will be your adventure to find those map pieces and locate the treasure. You will start out on your ship with the first clue to the treasure and along the way you may encounter the Royal Navy, sea monsters and other pirates. You will engage in sea and land battles, loot merchant vessels and follow clues through towns, uncharted waters and wilderness all to find the greatest fortune every massed by one pirate.

I am going to work a little on the graphics and get some animations working and then I will post either a screenshot or working prototype of the game in the next few days.

Looks like Microsoft wants to join the ranks of companies with really crappy customer service such as Bank of America, Sprint, Comcast, Dell. Full story...