In my previous post Memory Management I was talking about storing character and room data in server memory.

For the Character memory management I basically just use a DateTime value that gets updated each time a request is made by the connected player. If the DateTime exceeds a certain limit such as 20 minutes then the character data is saved and removed from memory. If the player just has a long pause between requests their character data will be reloaded if they make another request after the cleanup.

For the Room or Place data I've though about doing the same thing, just store a DateTime value and update it whenever a player performs an action in the room. I am not sure this is the best approach since the only commands that reference the Place object are movement, looking, some inventory and buying commands. Other actions such as casting spells, viewing stats, private chat, etc. do not reference the Place object. Of course, I guess if you are not accessing the Place object no need to have it in memory but once a player attempts to move again I would need to reload the Place. I might just maintain a list in the Place object of all the players currently located there and only remove the object once those references have been removed. I'll try a few things and record what I find.

For Perenthia I am planning on utilizing server memory as much as possible without crippling the web server. To do that I am going to be maintaining player data and room data in memory for fast access and quicker responses from the interface.

The basic idea is that players login, choose a character and begin playing. This character information will be loaded into memory and persisted to the database when the data is changed, such as when commands are executed. As players move around the rooms they enter will also be persisted into memory to make loading and re-loading rooms faster.

The trick will be effective management of these resources. Character data will be removed after inactivity but I haven't figured out a good scheme for removal of the room data. Hope to have that working before too long though.

Adventures in LINQ to SQL

I've been playing around a little with LINQ to SQL for Perenthia and wanted to share a kind of nasty query I just wrote. In Perenthia the typical RPG classes are called Professions. To track these professions I have the following database tables: 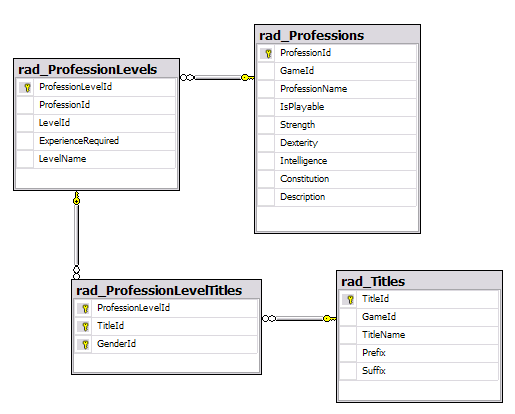 When loading up a player record I need to go and get the level number, level name, profession name and title prefix and suffix values from the database. Since I am using LINQ to SQL for my entity classes I wrote the following query to retrieve this information:

It's kind of a nasty beast but produces the following SQL query:

The @p0 value is the ProfessionLevelId value stored with the player record.

The LINQ query is nasty because of the three outer joins I have to perform because not all profession levels have titles. It doesn't look pretty but it does work; as I get into more LINQ writing I will probably find a better way to write this but at least I got my data. :)

Andy Beaulieu has posted another great article about Advanced Physics with Silverlight and Farseer. His demo allows you to draw objects that are then associated with a Farseer Physics Body. Andy mentions me in his post and references the code I created to render a Path based on Vertices. Andy's first tutorial "Getting Started with Farseer Physics and Silverlight" was key in helping me understand how to get Farseer working with Silverlight.

I finally got everything updated for BlogEngine.Net 1.3 so now my comments should work :) 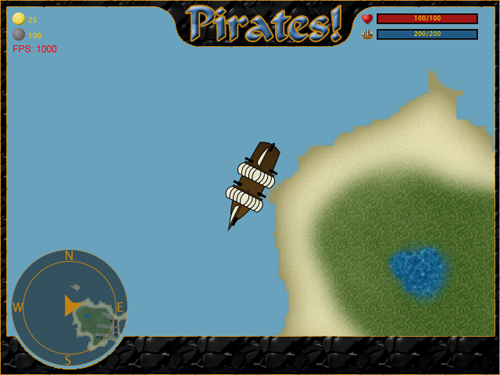 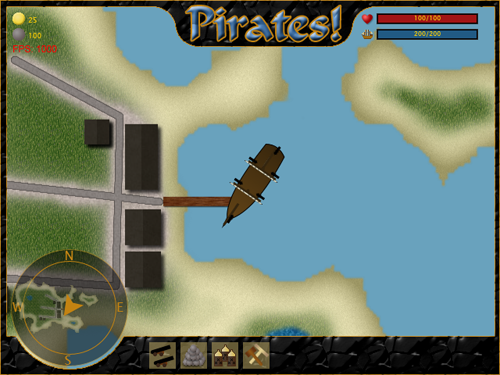